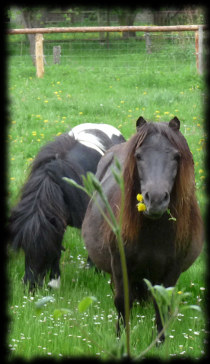 Our stud is the first stud in Poland to breed entirely pure bred Shetland ponies fully complying with the mother Shetland Pony Stud-Book breed description and International Shetland Pony Committee standards. We base mostly on Transy, Waulkmill and Wells bloodlines and breed for kind temperament, good conformation and type. The former resident stallion at stud, Waulkmill McPhee SPSB 4302, the first Shetland stallion officially imported to Poland from the UK, had consistently thrown top quality foals. Some of his sons now are used on our mares. While visiting Imno , Mrs Diana Staveley, the former President of the Shetland Pony Stud-Book Society, remarked similarly to other foreign judges who assess our ponies every year, that majority of young stock produced at Imno were of the quality comparable to those shown in other ISPC member countries.